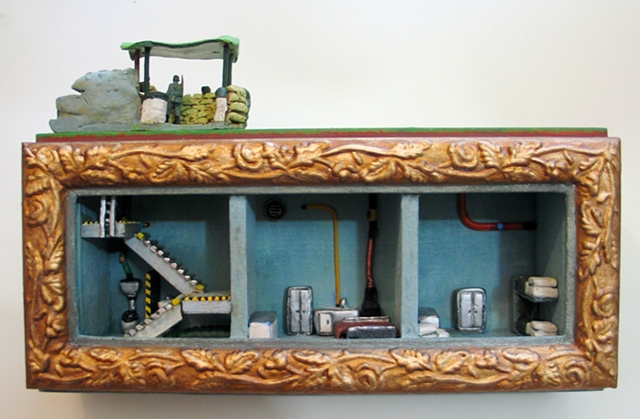 Synopsis In 5,600 years of recorded human history, 14,600 wars have been documented.

The madness of war captivates the media, corporations, the chain of command, politicians and their policy advisors. They are caught up in its excitement, horror, spectacle and disaster. War drives everything else off newspaper front pages and the nightly news. It does what religion is supposed to do: raise life to a level of importance. War is a paradox, ingrained in our very consciousness. There is something huge and sublime about its threat. We go to war even as we hate it.

War can be imposed on all the protagonists against their will and there are no logical limits. It is like an alien force. At a more basic level it is in tune with something in the human soul: the psyche normalizes the folly of war because it is an archetype.

The machines of war and the soldiers that operate them can be seen from the safety of the lounge room or cinema. What we project is a fantasy and not their true nature. War and its depiction raise issues about its seductive nature. Images of war, its power and violence are manipulated by the way states and the media make war appear simulated, aesthetically desirable and alluring – pornographic even – but never real. We want to see more and want there to be more, “at certain distances and with certain modifications” Like the awe experienced when confronting the sublime of nature. Some things are to be viewed from afar or the safety of a path.

Military objects and events, inhabit, exist and lurk in a landscape of the sublime. My past Practice was an investigation; exploring aspects of terrible objects and the sublime. Envisaged within the landscape: as a field of military operations. I intended, a sense of absence and mysterious coldness that is adrift of real time and experience; “the light of reason is refracted”. There is perhaps also a guilty interest in the military object, its form and function and the context of its operation.

My current research is focussing on the sublime of Military Production, Consumption and Logistics. Logistics makes everything about war possible. The work is constructed using found wood; additive sculpture. My process and method is a very analogue (hand tools only). Behind the physical work and informing this current project (s) is research concerning semiotics, the sublime of production, the sublime of logistics and masculinity.